With the incredible A Tribute to The Human League : Love Distraction – formerly Dare taking to the Main Stage!!!

LOVE distrACTION is the UK’s no.1 premier Tribute to The Human League. Utilising a clever mixture of live synthesizers and guitar, this truly accurate, authentic, dedicated and genuine tribute act capture the exact mood, essence and feel of The Human League. The band consists of Nic Price who delivers an uncannily accurate vocal portrayal of the mighty Phil Oakey, Nick Stylianides – Musical Director, programmer and live key-boards plus Russ Harvey – programmer, keyboards and live guitar. There are also a small group of talented professional singers and artists taking on the roles of Susan Sully and Joanne Catherall. Formed in August 2017, they have enjoyed rapid success, playing an impressive mixture of shows all over the UK.

Known for their ability to sound exactly like the iconic 80s group, LOVE distrACTION’s attention to detail and musicianship is the reason why many are already referring to them as the UK’s premier Tribute to The Human League. Love DistrAction is as true as it gets to the real thing, with their captivating con-cert style show, guaranteed to bring back special memories, keeping you fully entertained and mesmerised from the time they walk on stage, right through to their breathtaking finale.

‘The time to hesitate is through’…

The Strange Doors – UK Doors Tribute Band will be taking to the stage in the VIP Big Top on Sunday to ensure that your last day continues to ‘Light your fire’!

The Strange Doors takes you back in time by recreating the sights and sounds of legends that you know and love. This band doesn’t just replicate the studio versions of Doors classics; they actually recreate the live Doors experience. Here you will find ad-libbed poetry, a singer that jumps into the air and writhes on the floor, jazzy organ solos, bluesy slide guitar and powerful, yet subtle drumming that punctuates the music and vocals.

Like a gig by the real Doors, and unlike other Doors tribute bands, a Strange Doors gig has an air of unpredictability… audiences are kept guessing what to expect next.

‘Let me put you in the picture, Let me show you what I mean’

…basically we have another fantastic band lined up for you on Friday at Tribfest 2020! The Absolute Stone Roses will be tearing the proverbial roof off the main stage and we can’t wait!!

The Absolute Stone Roses are a tribute band to the Manchester legends The Stone Roses and they have left no stone unturned in the search for musical perfection in creating a ‘Resurrection’ of the times.

If you’ve never seen the real deal, you want to re-live your youth or feel that vibe then The Absolute Stone Roses will take you on a trip there with the attitude and baggy fashion to boot. 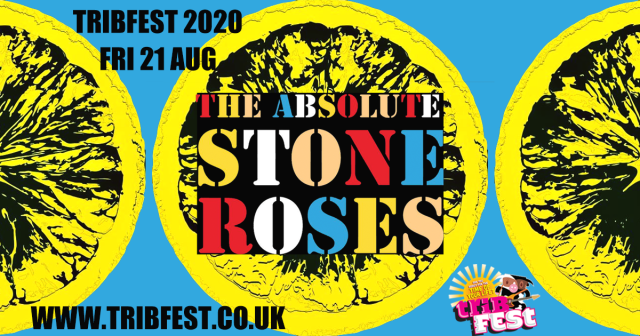 Posted on January 7, 2020 by Tribfest Music Festival
Posted in Tribfest 2018 | Leave a comment

‘Knowing Me, Knowing You’…

….we’re all going to be as excited as each other about the fact that Revival ABBA Tribute Band are back with us in 2020!

The legend of ABBA lives on with an incredible legacy of timeless tunes and their undeniable place in music history. The Swedish supergroup is as popular and well-loved today as it was in its 70’s heyday, with classic pop songs and dance floor beats familiar with generation after generation. Never in the history of pop has one group been so celebrated and revered!

They are without a doubt the best ABBA tribute band to emerge from the UK, selling out shows throughout the UK and internationally for over 7 years, they are quite simply the premium ABBA experience.

Jax & Co are taking us to Jackson again!

Posted on December 31, 2019 by Tribfest Music Festival
With the greatest hits from the legends that are, Johnny Cash and June Carter.
If you saw these last year then you will know why they’re back for 2020!
Jax&Co are a six piece Johnny Cash Tribute family band from Ipswich that perform the music of Johnny Cash and June Carter in a theatrical, warm hearted, fun filled show.
Brother and sister Jax and Harper play the roles of johnny and June, with accompaniment from cousins Andy and Tom and papa Nos, with special guest vocals from Mama D. So if you like to sing and dance or simply like to listen to some great old-timey tunes, then come along and walk the line with the fabulous Jax&Co. 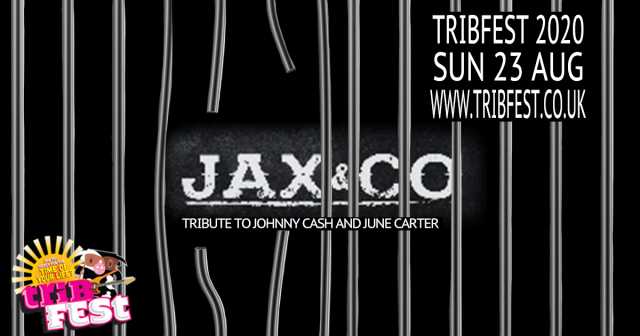 ‘Mr. Saturday night special” at Tribfest on a Sunday….AGAIN!

Aynt Skynyrd have a philosophy on recreating the songs of the greatest rock ‘n’ roll band the world has seen, and it’s a simple ethos……

Don’t play it…. Feel it! In their 12th year now, they have toured up and down the UK, playing all sorts of gigs from festivals to bike rallys and everything in between. But one thing that is consistent is their commitment to creating a genuine sound.

They are a self-proclaimed fully dis-functioning awesome rock’n’roll band. Still playing it like they stole it (thanks mad Andy), still bickering like school boys (and girls) and still chasing that dream. 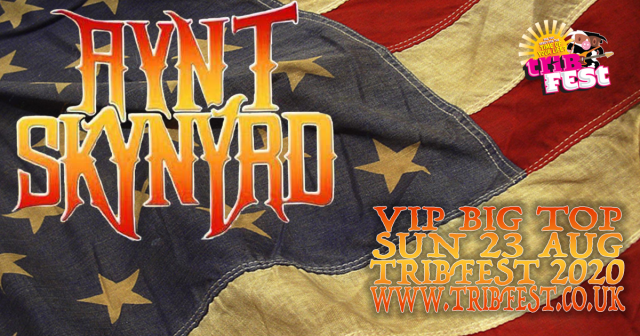